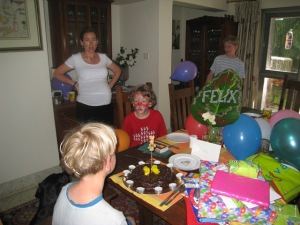 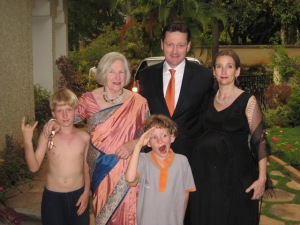 We have been very fortunate to have Gabi’s mother, Isabella, with us for the past few weeks in the run up to the birth of the new baby. Isabella spent a few years in India in the early sixties and is very comfortable with all things Indian including wearing a traditional sari which she did so when we went out for a reception with the Bhutanese Ministerial delegation. Of course she was a great hit with the Minister and his team and received numerous invitations to visit the Himalayan Kingdom – her next adventure no doubt!

Finbarr had arrived home from school a few days before the official end of term in anticipation of the arrival of the new baby but as it turned out the baby didn’t want to come out and made us all wait a full week beyond the due date.

We continued to wait for the baby due around 18th June and as the days ticked by we celebrated Felix’s birthday. He was relieved that his birthday party was not postponed to allow Gabi to go into hospital and all went ahead as planned. Still we waited ……

Felix’s birthday was on a Sunday and we had a fun birthday breakfast, everyone at Church sang Happy Birthday to Felix and we went off to the Oberoi for our Sunday lunch followed by a 90 minute game of football on the lawn which tired us all out – Gabi walked around the garden numerous times to try to encourage the baby to make a move but no action! 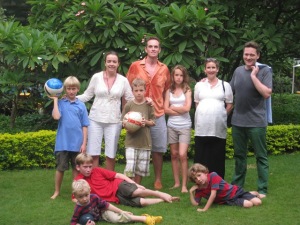 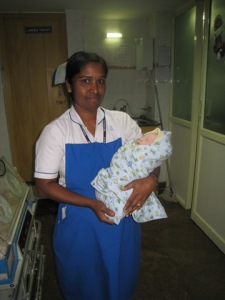 And so finally we had to bite the bullet and went into the hospital late on Sunday evening. Baby continued to resist and eventually popped out on Monday afternoon at 2.57pm weighing 3.8kg after putting Gabi through her first Caesarean. The nurses at the Mallya Hospital were very nice and of course, Gabi had Dr Susheela Shetty with her – Susheela delivered Felix in the same hospital exactly ten years and one day earlier as well as Fergus “only” seven years ago. We are so fortunate to have had such a great obstetrician for all the boys born here in Bangalore.

Gabi stayed in hospital until Friday – recovering from a caesarean is clearly a much slower process – and had a very quiet week at home.

The baby has been named Frederick James Stanley – the boys were having none of the plans for names other than an “F” and so we went through all permutations and ended up with Freddie. Gabi’s wonderful father was called Glyn Lonsdale Stanley and so we remember him in Freddie’s new name.

Finbarr spent his week down in Chennai at a crocodile farm learning about different variants of those reptiles and came back with fantastic stories of gharials, crocs and moving them around, tying elastic around their chops while they moved them and so on.

So finally after nearly two weeks we managed to get the whole family together again and had a lovely day with our first family outing to Church and then to our second family at the Oberoi for a celebration lunch – welcome to the world Freddie Holland!!